Mt. Hood – Climbing to the top! 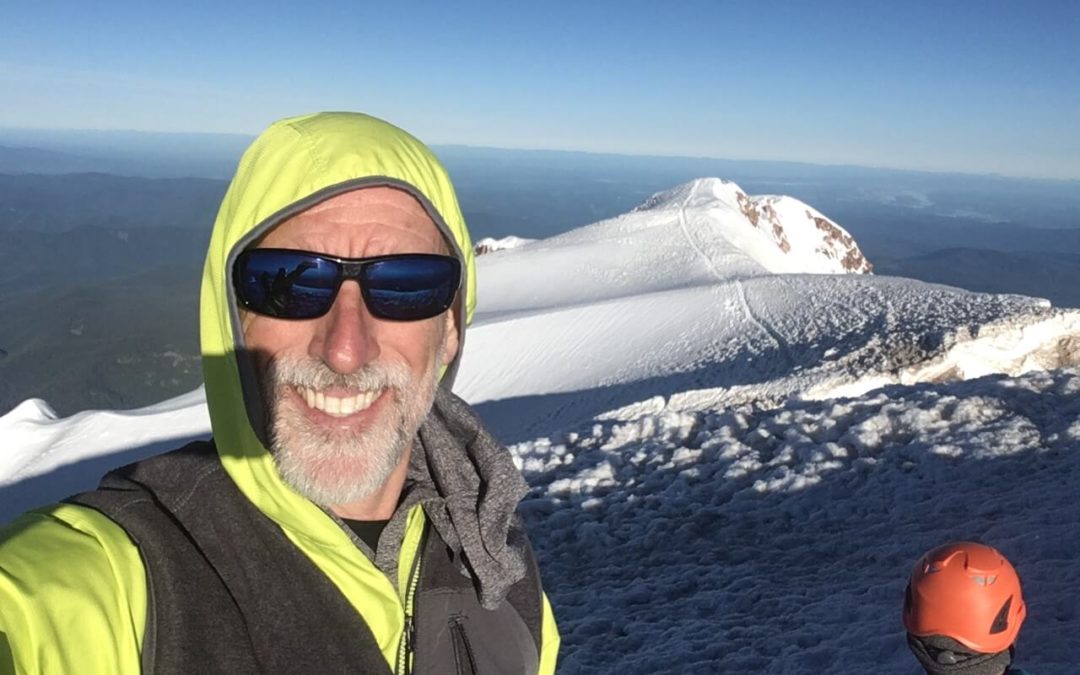 The Columbia River Gorge has two terrific towers, one on each side. Mt. Adams to the north at over 12K feet and Mt. Hood to the south at over 11K feet. Mt. Hood is said to be the second most climbed mountain in the world and while I don’t know what qualifications were used in that assessment, it did make me think that if so many people could climb it, then why not me?

This was my first mountain climb where special gear was a necessity and I went very prepared with an ice axe, crampons, sturdy boots, trekking poles, helmet, many emergency items and great clothing. After some online research a novice like myself could tell that the first 80% of the climb was simply a very long and fairly steep trek that at most required endurance and prudence, followed by an extremely steep (time for crampons, ice axe and helmet) 20% that made me wonder if I really wanted to go through with it. During my research, the most important thing that I learned was that I should either hire an experienced guide for my first Mt. Hood summit, or invite one of my many highly experienced Mt. Hood climbing friends to help me out.

Adam, his twin daughters Laurel and Joanna, our friend Jake and I arrived at the Timberline Lodge parking lot near midnight with the plan of making it to the summit early enough to see the sunrise. After Adam had chatted with a few other climbers with some recent data on a portion of the climb called the “Pearly Gates” (I’m not sure if that name should make me confident or nervous) he decided we should wait two hours so we would have better visibility for that final and nerve-wracking portion of the climb. While sitting in the parking lot passing time I remembered when I asked Adam if we were going to rope ourselves together as I had read that some groups consider that the safest way to go. Adam replied no, because he preferred to let someone die alone rather than making it a group event. That will make you think things over twice!

Finally, we were on our way at a moderately fast pace because we were trying to keep up with the 18 year old twins. After a nice long and steep hike in the snow we hit a little flat area where there were steam vents about 1,000 feet below the summit. It was at this point that we geared up with crampons, helmets and ice axes. Both Jake and I were feeling a little funky at this point. I wondered if it was the elevation or just being tired from the climb thus far. Turns out that it was the steam vents pushing out some smelly sulfer which was blowing directly towards us. Once we got past that point, we were feeling great.

We had to negotiate around a crevasse, and then it was up the super steep portion of the climb. As in, put your arm straight out in front of you and touch the near vertical snow cliff steep. It probably was not really that vertical, but it sure felt like it. Getting a solid foot hold and using the ice axe was paramount. My ice axe had a lanyard that went around my wrist which gave me a little more security and I did not spare any energy in getting that axe buried deep with every step up the wall. Something that gave me comfort and confidence was that we took our time to make sure we did not make mistakes.

It was on this extra steep portion that the shadow of Mt. Hood appeared. With the sun coming up in the east the shadow Mt. Hood cast was the shape of a pyramid for about sixty miles to the west. Adam had told me about the shadow, but it did not seem like a big deal to me at the time, until I had the privilege to witness it. Amazing.

Upon arrival at the summit, we just stood there in awe. The best way to explain the feeling is that I recognized just how small I was. Growing up and living in this area all of my life gave me a fun advantage as I was able to start recognizing landmarks that were hundreds of miles away. I found the valley that I live in on the White Salmon River in BZ Corner, of course all of the major mountains of Oregon and Washington but the most amazing sight to me was to see the mighty Columbia River snaking its way east and west like an endless ribbon. We were super blessed to climb on a very clear day with almost zero breeze at the summit. After enjoying a victory breakfast at the summit (PB&J for me) it was then time to descend which is about as scary as the climb.

Now, time for a bit of clarification for the reader. Much of the way I expressed the caution and danger of this fun adventure may be a little over the top, but it is exactly how I felt deep-down inside myself about attempting something I’d never done before. Being a whitewater guide on the White Salmon River, a wilderness backpacker and having raised four daughters makes me think of myself as a pretty brave and even daring man most of the time. So, don’t fear this adventure, but please, enter into it well prepared.

Self-registration is required and can be done in the Wy’East building which is nearest the parking area.

Go prepared with the right gear and the right friends.

Mt. Hood is under the management of the USFS.

As always, never hesitate to hit me up for information about the great activities in the Columbia River Gorge and remember our family business if you need a rafting trip! ZooRaft.com

You friend in the Gorge, Mark Zoller – MarkZ@ZooRaft.com