White Salmon River – How’d it get its name? 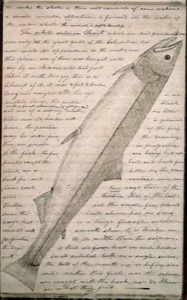 Corkscrew. Siwash. Waterspout. Zoller Zap. Grasshopper. Top Drop. Each great rapids of the White Salmon River and cleverly named. It was 1981 and none of the rapids had names that year dad opened up the first rafting company on the White Salmon river. Then comes a fellow named Doug North ready to include the White Salmon River in his new Washington State rafting book. He asked my dad take him for a ride so he could collect information for his book. About three rapids into the run, Doug says,“Phil, what are the names of the last three rapids”? Well, they didn’t have names so dad just started making stuff up (a sign of an expert river guide). And that is how we got the rapid names we have today.

Lewis and Clark did NOT name it the White Salmon River! Tuesday October 29th1805 Lewis and Clark set out into the Columbia River from the Bingen Point area and paddled toward the large sand bar created by the Hood River. From their journals: “opposite to a large Sand bar, in this creek the indians above take their fish, here we Saw Several canoes, which induced us to call this Canoe Creek it is 28 yards wide…”. Based on their location, they named what we know as the White Salmon River, Canoe Creek. On their return voyage in 1806, they would take a better look at “Canoe Creek” and realized it was a much larger body of water and upgraded the name to “Canoe River”. Interestingly, they named it Canoe Creek in early October the lowest river flows of the year, and then upgraded it to a river when they witnessed the springtime flows.

What is a White Salmon? According to the USGS there is no salmon named “white”. So where did the term “white salmon” come from and how did it get attached to our beautiful river? Again, from the journals of Lewis and Clark. Sunday March 16th1806“The white Salmon Trout which we had previously seen only at the Great Falls of the Columbia or a little below the Great Falls, has now made its appearance in the creeks near this place.”  The “Great Falls of the Columbia” is certainly Celilo Falls 35 miles upstream of the White Salmon River. The journal entry above was penned while they were still in the coastal area of the Columbia River. With this journal entry there was a sketch titled “White Salmon Trout” and an incredibly detailed description of the fish including the number of rays each fin had. The website that showed me the sketch of the fish labeled it a Coho Salmon, which in size makes sense, but with one look at the tail-fin a novice fisherman such as myself could see it looked far more like a Steelhead which is in the trout family. So, I forwarded the sketch along with the fin descriptions to a trusted friend, Margret, of the Mid-Columbia Fisheries. The report back from Margaret and one of her associates, Conner, was that the sketch and detailed description in the writings described a steelhead opposed to a salmon. Lewis and Clark’s “white salmon trout” is in fact a Steelhead. Could I really be rafting the “Steelhead” River? So now we know that Lewis and Clark coined the term “white salmon trout”.

So how did the term “white salmon” get attached to this river? Fast forward 50+ years to 1859. There was a naturalist hired on with a railroad survey team named George Suckley who also documented a fish as the “white salmon trout”. From his writings: “There is, however, a kind of salmon which runs up the small rivers below the Great Falls (Dalles) by the settlers, and a river which they ascent in great numbers by preference is named, from that circumstance, the White Salmon River. It is possible that this “white salmon” may be the sliver-white salmon -trout of Lewis and Clark”. This lets us know that prior to 1859, the river was in fact known as the White Salmon River. A White Salmon post office was established in or about 1872 so we know that settlers had been building community for at least a few years.

Who applied the name White Salmon? Well, that is still a bit of a mystery, however there is great evidence as to when and why it was named the White Salmon River. From Albert J. Thompson’s book Memories of White Salmon written in 1923 he has a quote from local historic figure Theodore Suksdorf  who had come to “White Salmon Flats”, now known as Bingen in 1874 who gives a less attractive origin of the name as follows: “In early days in the fall, September and October, immense droves of sick salmon came into White Salmon River. Their meat had turned white and they had more or less sores over their bodies. These sores turned perfectly white, probably on account of a fungus and they died by the hundred”.  We know that the fall salmon that come into the White Salmon are a species called Tule and when they enter the freshwater system of the Columbia River they are ready to spawn and we all know what happens when a salmon is in its spawning phase. It turns white and dies.

So, it would appear to me that the term white salmon trout was coined by Lewis and Clark as they described a Steelhead. The term was affirmed by naturalist George Suckley 55 years later. However prior to Suckley’s work of 1859 early settlers named the river after the spawned out salmon, just as I have assumed all of my life.

What’s my favorite name for this pristine river? Personally, I prefer the native name of the White Salmon River which was Nikepun. I’ve been told that the river was probably referred to as “the river of the Nikepun” likely a local tribal family.

As always never hesitate to reach out to me about all the great fun you can have in the Columbia River Gorge! MarkZ@ZooRaft.com